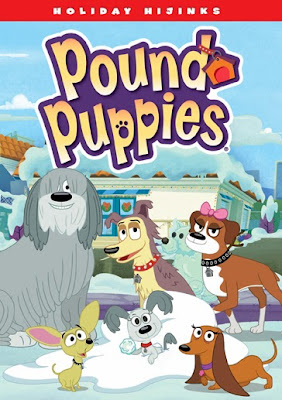 My girls love the Pound Puppies. I remember as a little girl watching them myself. Today that have redesigned the adorable pups and created some new cartoons featuring them.

My girls were so excited to view it and you can bring it home also starting on November 5th, 2013.

The gang wants to ensure that every pup has a home of their very own for the holidays and as you can imagine they have fun doing so. My girls loved the dvd that includes the following episodes:

Your kids will absolutely love it too and how could they not. A full cast of adorable pups and their names are just as adorable too: Lucky, Niblet, Cookie, Strudel, Squirt, and Mr. Nut-Nut.

My girls favorites were Cookie and Strudel. I honesly couldn’t pick just one….I loved them all.

About Hasbro Studios.
Hasbro Studios is the Los Angeles-based entertainment division of Hasbro, Inc. (NASDAQ: HAS). The studio is responsible for entertainment brand-driven storytelling for the company across television, film, commercial productions and short-form. It develops, produces and distributes TV shows based on Hasbro’s world class brands, including TRANSFORMERS, MY LITTLE PONY, LITTLEST PET SHOP and FAMILY GAME NIGHT.
Many of these shows air on Hub Network, a U.S. television network for kids and their families, that is a joint venture between Hasbro and Discovery Communications (NASDAQ: DISCA, DISCB, DISCK). Hasbro Studios shows can also be seen on networks in more than 170 countries globally.
Since its formation in 2009, the studio has received seven Daytime Emmy wins and 16 nominations. On the film side, the studio is developing and producing a number of features based on Hasbro’s brands, including TRANSFORMERS 4 (Paramount), STRETCH ARMSTRONG (Relativity Media) and CANDY LAND (Sony). The studio team also oversees the production of commercials that feature Hasbro’s brands as well production of short-form content that can be seen on all of the major digital and social media platforms globally.

Disclaimer – I am disclosing this in accordance with the FTC 16 CFR, Part 255 Guides concerning the use of endorsements and testimonials in advertising. I received the item(s) mentioned above for free for review purposes. In no way did this alter my opinion of their products. All of my opinions are one hundred percent honest, true and my own.